Phnom Penh between the cracks 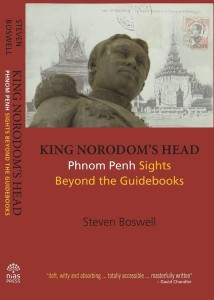 THE RESULT of exhaustive legwork and years of poring through French- and English-language archives, Steven Boswell’s recently published Kind Norodom’s Head is a tapestry of anecdotal colonial-era gems woven together with temple-spotter minutiae. Featuring copious black-and-white and color photographs, it works well as a pick-and-choose, dip-into-and-read compendium of Phnom Penh esoterica.

In other words, if Chapter 4, An Angkorian Site in Phnom Penh (referring to Wat Unnalom in the Riverside area), gives off the academic whiff of the library, Chapter 15, La Taverne, Madame Chum’s, and Other Favoured Haunts of Days Gone By, is a lively account of forgotten drinking establishments and opium dens that colorfully evokes the interregnum between Cambodian independence (1953) and the Khmer Rouge capture of the city in 1975.

For visitors in that era, Post Office Square was the heart of the city. Today, the only building not in a state of shabby disrepair there is the Post Office itself (faithfully restored in 2004). No evidence remains of the Phnom Penh’s then most celebrated lodgings and dining establishment, the Hotel de la Poste and the adjacent La Taverne, both owned by one Monsieur Mignon, though the author forensically traces them to the block on Street 13, between Streets 100 and 102, now home to Seeing Hands Massage by Blind People and a hole-in-the-wall souvenir shop.

‘They all seem pale, tentative and unsettled. They wear the vague abandoned air of bric-a-brac left behind in an empty house’

Boswell quotes British journalist Maslyn Williams, who visited in the 1960s, on the subject of the French patrons of Hotel de la Poste and La Taverne as “leftovers from the French exodus that followed independence”, adding, “They all seem pale, tentative and unsettled. They wear the vague abandoned air of bric-a-brac left behind in an empty house.”

Others, notes Boswell, were less condescending. Historian David Chandler, for example, nostalgically recalls staying at the Hotel de La Poste and eating at La Taverne three times a day during a three-week stay in Phnom Penh in 1971. Travel writer Christopher Pym, who visited Phnom Penh in the mid-1950s, wrote of La Taverne, “It … reminded its clients of France, which is the highest compliment one can pay to a Phnom Penh eating house.”

Prince Norodom Sihanouk was so enamored of the establishment, according to Boswell, he frequently engaged the services of Monsieur Mignon to “prepare gala meals for foreign dignitaries”.

The recording of details such as this, published against the backdrop of Phnom Penh’s most large-scale urban “renewal” since the 1960s, is where King Norodom’s Head excels. Moreover, it is to Boswell’s credit that his book does not simply dwell on the city’s colonial-era memorabilia. It is equally attuned to Cambodia’s Phnom Penh as it is to French Phnom Penh—and with much in between.

Writes Boswell, “Saloth Suong survived the Khmer Rouge, all the while not knowing his younger brother Sar headed it. After that dark period was over, Suong’s wife, Chea Sami, who had once been a dancer at the palace, was instrumental in revitalizing the royal ballet troupe that her brother-in-law had demolished.”

In other words, King Norodom’s Head, cumulatively more than lives up to its “beyond the guidebooks subtitle”. As for the title itself, it refers to Boswell’s debunking of an arcane myth about a statue of King Norodom (1834-1904) on the grounds of the Royal Palace that has found its way into so many history books it has come to be accepted as fact.

“No doubt the issue of King Norodom’s Head was simply too minor a matter to spend time on researching,” writes Boswell, for whom obviously God is in the details and every fragment of Phnom Penh’s fast-vanishing past is worthy of scrutiny.

Harvest Season, a novel by Chris Taylor, is  available through Amazon in print and digital formats. In the UK: print, digital.