I’VE BEEN FEELING BAD about Cha-Am (I feel bad about the headline too, but I couldn’t help myself), a seaside town two hours south of Bangkok. I say that because several friends have visited over the past year and asked me to recommend an un-touristy, beachy kind of place close to Bangkok, and I sent them there.

And here I am  … At last, and for the first time ever. Apologies, Hugh, John, Cas, Carl and Zhimei.

First off—and huge relief—Cha-Am does actually have a beach. There it is pictured above. It’s almost the kind of beach the Tourism Authority of Thailand touts when it calls on you to drop everything and visit the Land of Smiles. And, as beaches go, it’s long—around seven kilometers long, according to several dubious sources on the Internet, and according to some of those very same sources (OK, Thai Visa: think Wikipedia for Thailand compiled entirely with information provided by the Thai wives of heavy-drinking Western retirees) the “longest white-sand beach in Thailand.” In other words, there may be longer beaches, but they’re not “white sand”; they’re something else. What exactly, I haven’t looked into yet.

Anyway, Cha-Am has sand and waves, and midweek it’s on lazy standby, chugging along on sluggish sales of floaties, seashell necklaces, parasols, beach hats, knock-off brand-name sunglasses, and all the while renting out the occasional tandem bicycle and serving up cups of Nescafe and plates of barbecued squid. In the more touristed, populated parts of the beach—at the intersection of what the cognoscenti call the North and South beaches (the demarcation is purely notional, but you need to figure it out if you’re going to talk geography with any of the locals)—the beach is literally a forest of beach umbrellas that crowd cheek-by-jowl, creating a darkened canopy that is perfect for Thai holiday-makers to huddle under, nibbling on squid and in mortal fear of the sun.

I respect that. The Thais know about the sun. They know you don’t lay under it. You connive to outwit it. And, yes, if you’re going to splash about in the waves, you do it fully clothed.

Of course, there are always some enterprising locals that cater to the Western fear of daylight. I stumbled on their makeshift Cha-Am outpost, lit only by tell-tale fairy lights, after a long day of ticking the boxes and verifying I hadn’t sent any of my friends on bad trips based on second-hand recommendations. Speaking as a former guidebook writer, we don’t do that. Never. Honest. 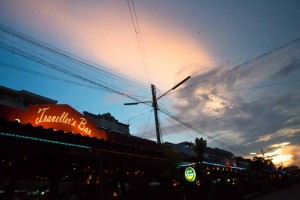 Harvest Season, a novel, is  available through Amazon in print and digital formats. In the UK: print, digital. Follow Chris Taylor on Twitter at @chrisvtaylor.